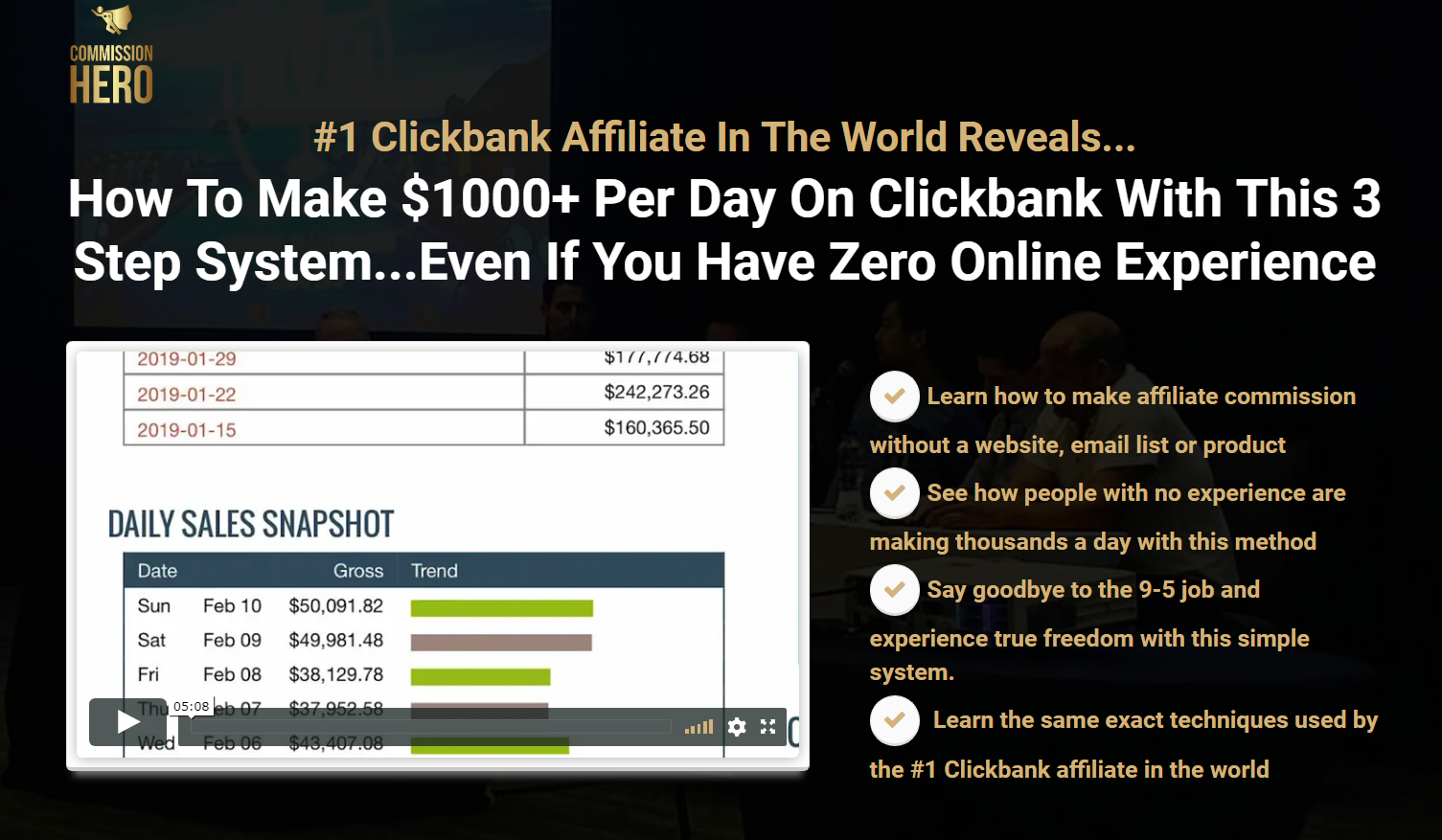 Learning to earn online is a valuable skill in today’s world since most of the transactions are done online, e-commerce style. It’s long been like this since the rise in popularity of the internet in the 90s. However, no one has predicted the extent to which our internet usage would factor in our lives. Now, you could easily get by without leaving the house. If you want something – you can just buy it on Amazon and have it delivered the next day. Want work? You can work online. Point is, almost everything can now be done online, and very easily, too, which is why it is always a great idea to learn how to make money online – and this is where Commission Hero comes in!

Commission Hero is yet another course that claims to have found the secret in making money online. It is a course that focuses on selling Clickbank products. The founder of the company, as he claims, is the #1 Clickbank affiliate marketer which should be enough to give weight to his advice. If his claims are to be believed, this course would teach you how to earn using effective and innovative methods that he himself has been using to earn at least $1,000 per day or more.

If you are intrigued now, wait until you hear what I have to say about this company. Until then, and only then, should you be making your decisions on whether to purchase this product or not. So, without further ado, let’s dive in.

What Is Commission Hero?

Commission Hero is a course priced at $997 that claims to show you how to make $1,000 per day using new and innovative marketing strategies. They claim to have found a simple yet effective method of helping you earn money which you just need to follow through.

This product is from Clickbank which you probably know as the largest affiliate marketing network in the world. If you want a course for something, any topic, chances are, you will find something similar on this platform. Needless to say, it is a huge platform with plenty of products to choose from.

Who Is The Owner Of Commission Hero?

The name of the owner is Robby Blanchard. And unlike many affiliate programs out there, he seems like a real person at the very least. I first found out about him on one of my Facebook groups where some members are posting about this “new” course that they found on Clickbank – it’s the Commission Hero. Apparently, the owner of the product has been posting screenshots of his day-to-day earnings. And from the screenshot information, you can clearly see how much he makes and the amount is staggering. If the screenshots are to be believed, he is making, on average, around $35,000 per day. And that’s not all, he claims to have done this using this method he’s about to show you. I will talk about the mechanics of this program a little later in the article. For now, we’ll discuss Robby Blanchard, who is he, really?

Very little is known about Robby Blanchard since he has just appeared on the scene. All the information we know about him is taken directly from him, and other sources that supposedly know him personally. Robby claims to be the #1 Clickbank affiliate member with monthly sales almost reaching $1M per month. That is quite a large sum of money, and I were being honest, a little suspect. First of all, if what he claims is true, why isn’t his name more well-known? Why is it only now that I am hearing from him? These are just basic questions, but to be fair, it’s possible that he’s just keeping it lowkey. In any case, his sudden bursting into the scene of affiliate marketing is quite questionable.

How Does Commission Hero Works?

When you go to the landing page of the website, they will sell you this idea that if you buy the product, you can say goodbye to your 9 to 5 job and say hello to passive income. The owner, Robby, wants you to earn good money passively, and he claims to have you doing it once you have finished the program.

Inside the program, you will be given:

As you can see, there’s really not much content for $997 price tag. For that price, I am expecting a little more but maybe, his recommendations are worth the price. Let’s have a look.

When you become a member, Robby will share the best products to promote to help you out on your journey. However, one downside to this is it’s possible that the market will be saturated with offers for the same product from the members of his network. Him giving you his product recommendations is basically just pitting all his members against each other. It could be argued that you are better off finding a product to promote on your own because at least, you won’t have that much competition compared to when you become a member of this network.

If there is merit to this claim, getting his insights would absolutely be worth it because he can’t have possibly attained such spot if he doesn’t know what he’s doing. If you get this program, at the very least, is you can have a glance at the inner workings of his mind and if possible, apply it to your own endeavors. It’s also worth saying that it’s possible that his claims have no merit whatsoever. Also, if he does have a secret, it’s very unlikely that he would share them inside the program. He won’t ever share his #1 secret because that would make you his direct competitor which is no good. Perhaps he would only give you a glimpse of what made him successful then you need to piece the tips together.

One of the greatest strengths of Clickbank affiliate programs is you can easily get a refund if you wish to. You will almost always get a refund directly from Clickbank because that’s just their policy. As a consumer, this can be a great thing because you can easily apply for a refund, no questions asked. However, if you are a product owner, you sometimes get shafted more often than not. And what’s worse is you won’t exactly know the reason behind the refund – did the user find your product bad? Whatever is the reason behind the refund, you’ll never know for sure.

Because of this loophole, it’s possible that what Mr. Robby has shown us isn’t his real earnings, but his earnings prior to the chargebacks. I’ve seen reports of refunds reaching up to 50%, depending on the product. Granted, 50% of his earnings is still a lot. Quite a lot, actually. However, it does mislead people into believing that he is earning less than he claims.

Before you buy an online money-making course, in this instance, Commission Hero, you need to factor in a lot of things because product owners intentionally leave out many details to ensure the sale. You need to make sure that what you’re getting is worth your money. This particular program is priced at $997 which isn’t exactly cheap, and could even be considered on the higher end in terms of pricing. In order to ensure that you are getting your money’s worth, you need to do your due diligence and research the product in the best way you can. If you have the money, you can test the product out and just request a refund if you’re unhappy with the purchase. Not that I am recommending you do such a thing but this is the best way to check if the product is worth its price.

Overall, you can’t expect to earn $1,000 per day without investing money on stuff. Maybe spending almost a grand on a course that supposedly teaches you how to earn money could get you started. But maybe, it doesn’t. Only you can tell, but only after you do your first move, which this case, is to buy the program.

However, if this program doesn’t interest you, you can head on to my other reviews. If you want a more specific recommendation, you can just head over to my #1 Recommended program.