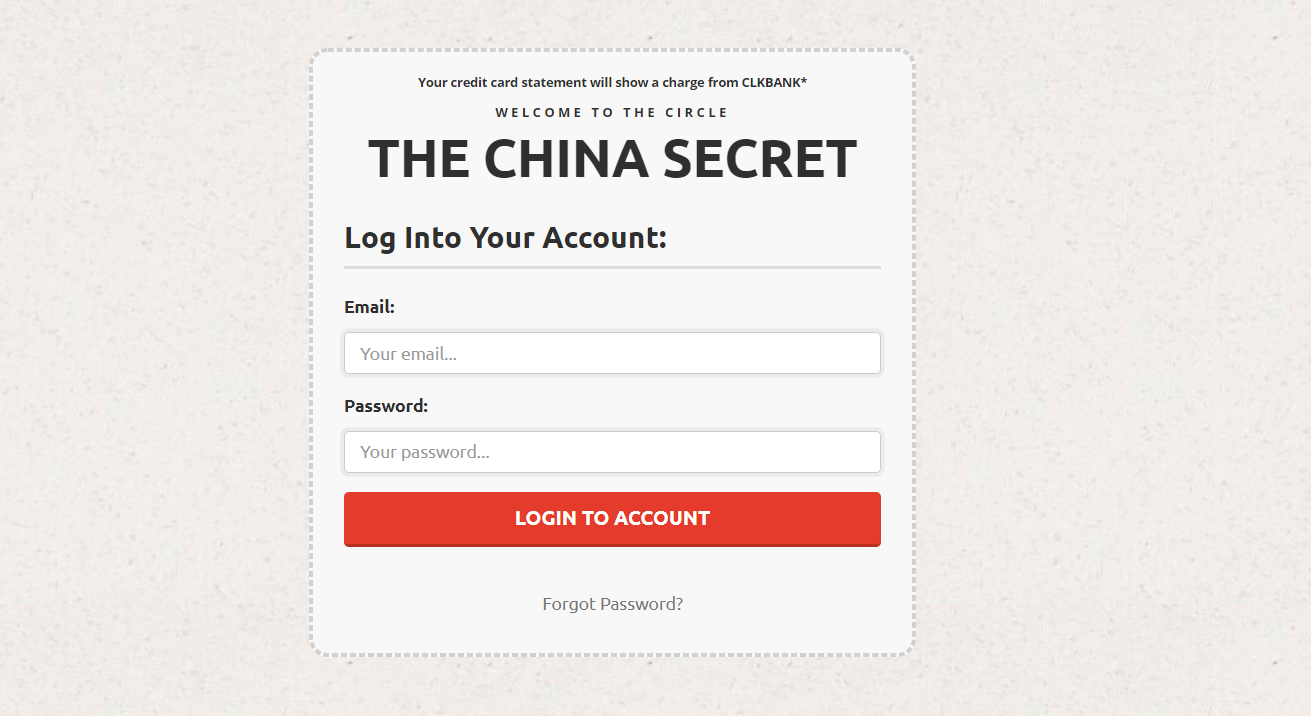 You must have stumbled upon this review because you are interested in making money online and thought that this program might be worth your time. You are definitely in the right place because I can tell you exactly what this program is capable of, and if it is indeed worth your money or not. I have reviewed a hundred products which made me somewhat of a figure in this industry, known for giving out honest reviews unlike other websites out there.

Today, we are going to review a program called The China Secret. At first glance, it is just like any program out there on the market. It follows the same routine, which is to have a big claim near the top of the page, a video in the middle, a voice-over, some testimonials, along with some other random stuff in there. Of course, there’s an offer near the bottom, telling you that you can’t miss out on their offers or something of the sort. Overall, it’s a pretty average program that just not jump out of the page.

What Exactly Is China Secret?

According to their sales page, The China Secret is a program that could earn you money almost overnight and what’s even better is you can do it at the comfort of only using your Facebook messenger. The reason it is called “The China Secret” is that the person narrating claims that it is a system that originated from China on WeChat, and has found success there. They claim to use the same technology but on Facebook messenger this time, and of course, along with it, the same kind of success.

When it comes to online money-making schemes, this idea is very new. I’ve actually never encountered a similar system in my years of review. I’ve reviewed auto-chat programs but as far as I’m concerned, this one’s an entirely different system. Perhaps the reason it isn’t that widespread yet is because of the uncertainty of the market, especially since it deals with messaging apps, out of all the available systems out there. Nevertheless, the founder of the program ultimately claims that it is free-money as long as you subscribe to his program. In this review, we are going to look into facts and determine if what the owner is claiming has merits in them or at least some truths.

How Do You Make Money Using The China Secret?

From my research, it seems like you don’t actually make money using the China Secret because the program itself offers no substance at all. It’s just a fluff product designed to make it look like the system has a product. Let me explain.

First off, the author makes very vague statements on how the program supposedly works. He never discusses the inner workings of the system and instead, just sets you up with the idea that you can also make money as he does just by using this product. He skirts around explaining how the system works by bombarding you with these grand claims that all look like BS, to be honest. Even after all that, you will go away not actually understanding anything about the system – you just go away with the idea that it should make you easy money, except it doesn’t really do that!

I’m a persistent kind of guy so I did my part and dove deep into the system to understand how it works, so to speak. Basically, it is a system that sells you a “secret” (the secret of making money online) and once you purchase the system, the only real instruction you get is you need to recruit other people to buy the same product. If you do that, you will earn a commission. Then, if your new recruit (downline) recruits more people to join, they will earn a commission too. It’s unclear if you will also earn a commission 2 levels down the line but it does seem like it. The scheme continues up to infinity, well, until of course, you run out of people to recruit. Does this seem familiar? Yes, it’s a pyramid scheme.

Who Is The Author?

The author goes by the name of Robert Walter, which from the looks of it, looks like a fake account, an alias perhaps. This is typical of many similar programs and it’s actually quite rare to find one that is authored by a real person. They all use some kinds of an alias to protect them from backlash in case something bad happens with their product. This absolves them of the responsibilities that come with their scam.

So far, you won’t find any information about this Robert Walter, or any hint of his real identity. All you get are stories that seem so far-fetched when you think about it. This Robert Identity claims to be earning $28,432.22 per day using this program. If he wants us to believe whatever his saying, why not reveal his real identity? If his program is genuine, why even hide using a pen name?

As I’ve said, this is probably because they’ve run the same scam before and it’s probable that they’d repeat the same scam, just in a different name, once this one found out. I’ve reviewed a lot of products that did just that. In any case, his shady persona isn’t doing this program any favors.

Red Flags of The China Secrets

In a bit of irony, China’s flag is actually color red – red flag! That doesn’t relate to this program but you can, maybe, consider that as a warning for this program.

The China Secret system priced their product at $9, which is on the low-end of the pricing, as far as pricing goes. The sales page makes it seem like you are getting a discount because it claims that the real price is actually a ridiculous $299.

The author claims to be earning so much money and doing so even while he sleeps. He promises you that you can do the same but I highly doubt it. So far, the author hasn’t shown verifiable proof of his income. Instead, he only shows receipts along with his claims. He thinks that we should take his word on the matter but that is never a case.

When you first check out the program, it would push you to the idea that you will earn money by using Facebook Messenger. That’s not true at all. Facebook Messenger is all but a tool to have you recruit more people to the program – and that’s how you earn your money. You just recruit people to the program and you get a commission every time joins under your network. This isn’t China’s secret at all. It’s like an open secret at this point.

The China Secret Review – The Verdict

The China Secret appears to be a pyramid scheme that is designed to fork over your hard-earned money for a longshot chance of earning your money back.

The reason I can tell is that the only way for you to actually earn money using this program is to recruit somebody to do the same. There’s never a system or program in place. What The China Secret program really is, is a placeholder program that doesn’t offer much value. In a sense, it’s more like a program that is just there to make the system not look suspicious.

I am actually not surprised by the results of my research. It’s to be expected from a program of this kind. The outrageous claims. The fake testimonials. The bogus owner, along with a slew of red flags makes this product not worth your time. You’re better off using other alternative programs, and I have a few suggestions. As I’ve said, I have already reviewed countless of programs. Most of which are scams but there comes a time, however rare it might be but it does happen, that I come across a good program that not only enables you to earn money but also learns a lot of things about online marketing. I’ve recommended many programs to my readers and I’ve only received a good reception so far. Without further ado, here is my recommendation (click the link below).