Is Vindale Research A Scam?

At some point in your life, you’ve probably searched for ways to make money online the easy way. This is quite normal since money is, you know, money. And having more of it surely won’t hurt. Today, we are going to look into another product that claims to pay its user for just answering survey questions but is really legit? Or is Vindale Research just another scam?

Unfortunately, like most people, your searches would’ve most likely turned up nothing. Or maybe, you are one of the few that scoured the internet and saw some opportunities but never knew how to follow through. One of the things you may have found during your searches is paid surveys. Paid surveys, as the name suggests, would have you fill out forms that pay out every time you finish one. It’s a straightforward job all things considered. Just answer the questions to the best of your knowledge and get paid for it – that’s how easy it is.

So, what’s the catch?

Just like any other money making online schemes available, surely there must be a catch. But let me tell you, there really isn’t a catch. You answer the questions and you get paid. It really is that simple. The only real thing you need to worry about is if the payment is equal to the amount of the work you put in. There are many paid surveys companies to choose from but not all of them pay fair. You need to weed through them to find out the best ones.

What Separates Vindale Research from the Rest?

On the surface, Vindale Research seems like a company with a good web design that looks pretty straightforward. If you search the domain’s history, you would see that it is almost 12 years old making it one of the oldest survey websites there is. The fact that it is still operating would suggest that it is at least not a scam. The company is owned by Nathanael Ehrich.

If you read reviews about Vindale Research, you can see that most of it isn’t bad, but also not good. To be perfectly honest, you really can’t tell if this is a good product or not based off several comments over the internet. You need a proper review to get an understanding of what this product is capable of. This is where I come in. I’ve been reviewing online money making scheme for years now. One could say that I am sort of an expert on this field and I am going to use this experience to help you decide if this product is legitimate or not.

How Does Vindale Research Work?

I’m telling you now that Vindale Research is indeed a legit company. It is not a scam which is almost always a surprise given that it does belong to an industry where scam is the norm. They are surely not a website which only aims to collect your data and even your credit card information (trust me, there are many scam websites that work like this).

You can either use your personal email address or Facebook account, depending on which you are more comfortable with. After that, you can almost start answering surveys but you still have one final thing to accomplish. And what I mean by this final thing is you need to answer a long survey because you can actually start (more on this later).

What is Great About Vindale?

Just like all paid survey websites on the internet, you need to read about the pros and cons of each product before you can decide which company is worth pursuing. You have to take note that you will invest your time answering surveys and you should only invest in those that pay well, or at least above the average.

What’s good about the Vindale Research is they pay out in cash. They do not offer discounts, promos, gift cards, or any other products related to their main lines, they just deal in cash. This makes the transactions more desirable to all parties involved. You can even opt to receive the money as a check or use Paypal if you want to.

This is probably the main reason you decided to read this article. You want to know how much they pay their user base. Well, the answer isn’t as cut and dry as you may have hoped. The amount varies by a lot, actually, and what I mean by a lot, is A LOT. They pay between $0.25 to $50 depending on the type of survey you can finish. There are some cases (extremely rare) where the amount paid per survey would go above the already high $50. 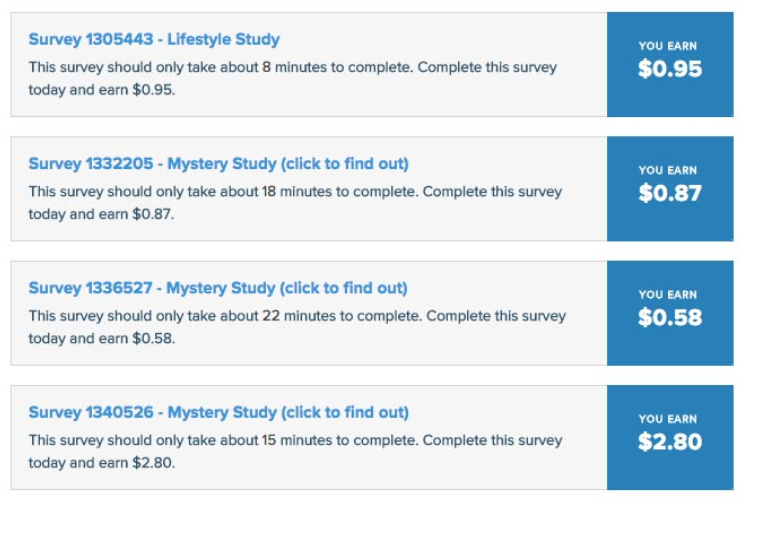 Among the most popular paid survey websites, Vindale Research fairs pretty well, consistently paying near the top of the list. However, I must say that getting a steady stream of income from this type of money making online scheme is very hard. One could argue that doing paid surveys is mere pocket changes and should only be reserved for those who need the money the most.

What is Bad About Vindale?

On the surface, it may seem that Vindale Research actually pays more than its competitors but don’t let that fool you. But the reason it pays so handsomely compared to others is not that it’s just being generous. Oh no – the reason it pays better is they have rigorous eligibility criteria that you need to pass before being given a certain survey.

The process for testing eligibility for a paid survey is actually by answering an even longer survey. Talk about survey-ception! But to be fair to Vindale, this has almost always been the case with other paid survey websites. At least in Vindale, you will be paid more than you would if you choose another program.

Another thing to consider is that it’s not available worldwide. The survey only works in the United States, Brazil, Australia, and Great Britain and a hefty chunk of the paid surveys are just inside the USA.

And here’s another bad thing about Vindale, and probably one of the many problems of paid surveys on the internet. They have a cashout limit. What this means is you can only withdraw your cash once you hit a certain milestone, which in the case of Vindale, is $50. If you’ve accumulated funds less than that, well, luck isn’t on your side and you need to work your way to $50 before you can withdraw. But here’s a thing, it expires after a certain period, meaning that prolonged state of inactivity would have you lose most of what you earn just because. That’s got to be frustrating.

Vindale Research is a legit company, no doubt.

Yet it certainly looks like it isn’t worth much, in terms of earning potential. While yes, you can make money using this product, you actually have a lot of limitations on how much you can earn. What’s more, is you need to jump through several hoops in order to be considered for their biggest surveys. If not, you are stuck with whatever paltry pay their other basic surveys are paying – and that’s not a good stream of cash.

What I’m saying basically is this company is not for everyone. It is a legit company, don’t get me wrong. However, for the money you can potentially earn here, there are certainly better companies out there. For less effort, you can find better companies out there in terms of profitability, stability, and success rates. If you want to check out my #1 recommended program, you can simply click this link.

The fact remains that paid surveys on the internet would never be one of the most efficient ways to make money online, and that’s by design. It’s such a shame that many people are still falling into this idea that it can make them enough money to be considered a full-time job. A more fitting term is pocket change – with paid surveys, your potential earning is just mere pocket change and that’s the cold sad truth.