Is Secret Millionaire Bot A Scam? 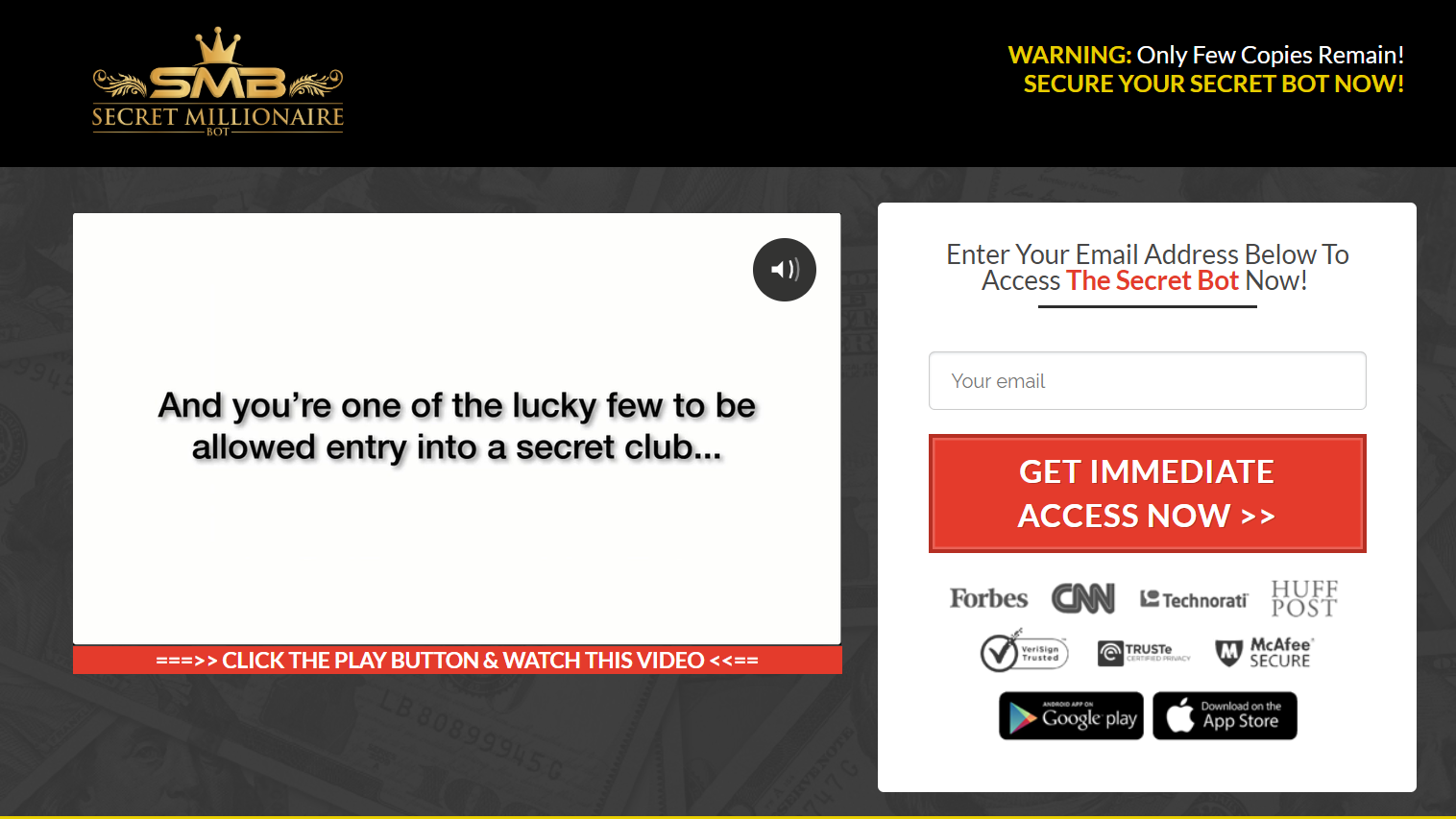 In all my years of reviewing online money making systems, I haven’t found a single program that could make you money automatically. Yet, there are literally thousands of programs that claim just that. They claim that once you buy their product, you can now passively earn money without even lifting a finger. All of it just because you bought their product. Obviously, companies that make such claims are not being truthful at all. There’s never one product in the world that would make you tons of money without you putting in the effort.

Today, we’re going to review a program that claims just that. It claims to help you earn $2,479 a day using automated software. Now, at first glance, when compared to other programs that I’ve reviewed in the past, the amount they claim is actually on the low side. I’ve reviewed programs before that claims 10x more than that per day – of course, I tagged those as SCAMS. This one though, we’ll have to see. We will take a plunge into the system and actually study how it works. We’re going to examine if there’s even a slight chance that their claims have some truth into them.

How Does Secret Millionaire Bot Work?

According to the creator, Charles Allen, the software will do all the work for you and you just have to wait for your check to come at the end of the week. Once you pay for a subscription or a one-time fee, you will be eligible to earn a never-ending stream of cash that no other program could offer.

In my experience, claims like these are never true. I would actually say that more than 99% of companies that have the same tone or sales pitch as this one are full-on scams. It doesn’t matter how good a software it is, the fact of the matter is, no software is powerful enough to generate cash without human guidance. And if there is one, you can bet your life savings that no entrepreneur would sell that to the market. If such a product exists, only a handful of people would actually have access to it. Why even share it when they can solo the profit?

In a more technical look on how the system works, the software would actually work as a duplicator, wherein it will pump out several sites a day that would contain affiliate links pointing to the product. In theory, this seems like a good idea because more websites equal more affiliate links, but actually no. This has the reverse effect, actually. Google has been going hard on duplicate sites because they offer no value at all, information-wise. There’s actually no point in even indexing duplicate pages because the content can already be found elsewhere. That being said, what use would a duplicate website if it won’t be even seen by Google?

This is just one of the many red flags of this company and I haven’t even begun diving deep enough for all its flaws to float through the surface.

What Secret Millionaire Bot Has To Offer?

When you visit their landing page, you will be presented with a video that apparently explains the system as a whole. The video starts with the narrator claiming that you have stumbled upon a video that will change your life forever. He then goes onto explain that you have found out the video is the universe telling you that it is meant for you. I don’t even need to tell you that all of what she says is bollocks. It’s just a way for the company to hype you into thinking they are legit.

If you search the term “Secret Millionaire Bot” on Google, their landing page along with the video would be at the very first result, ultimately contradicting their claim that their video is super “Private.” This may be a very minute detail but it’s actually important to my next point – and that is, you can’t really trust anything that this company says.

If you are not familiar with internet scams, you may end up believing what you have just watched because let’s face it, the temptation of money is a very powerful drug, and could lead you to do stupid things, like investing in something that you don’t know about. That’s exactly what this company wants you to do. They want you to believe everything you just heard and make a decision right then and there. That’s why there’s a sense of urgency in their video. They want you to take action now because the more you think about it, the dodgier the deal seems to be.

After you watch the video, you probably have a somewhat vague knowledge of the capabilities of their software. Their software is nothing new, really. It just takes a website and duplicates it. That’s as simple a program it is. It’s just a copy paste program, basically.

The problem with this copy-paste approach is it is, without a doubt, the most undesirable trait a website could have in the eyes of Google. If Google has flagged your website for duplicate content, it would be removed from the search engine results, ultimately rendering your website useless. No one can visit you’re your website unless they have the exact URL, which will never be the case. With how affiliate marketing works, where the more impressive it gets, the better the sales would be, it will be impossible to turn a profit because your copied website has become invisible.

Another big problem of this program is it’s actually not user-friendly. With how seemingly simple the software is, they have somehow managed to bungle it up, adding complex strings and features that seemingly don’t add anything. It’s even funnier with the context that their orientation video dubbed the software as “so simple..” It’s actually needlessly complicated.

Charles Allen is also not a real person. It’s almost become a requirement at this point that for a program to be labeled as SCAM, they should only hire bogus people. Almost all of the scams on the internet do not use real people as owners, which is pretty self-explanatory. This one is no different. Charles Allen is not the real owner and not even a real person, as far as I’m concerned.

Another red flag is the upsells. While it’s normal for a program to have upsells, the lack of transparency of this program about the upsells makes it a really shady product. For instance, imagine buying a $1 product then right as you pay, the price jumps to $4 – how shady is that? That is almost exactly what this program does.

If you’ve ever tried chatting with a bot before, you must know that they have their limitations. First of all, they run on algorithms that predetermines their response. Say something that is outside their scope of given parameters and they would not be able to help you with anything. Even the smartest bot in the world cannot form a full sentence on their own. It needs the help of a good algorithm to be able to talk and makes sense. Having said that, this particular chatbot is just a run-of-the-mill bot that does very minimal explanation but rather focuses on sales and how to turn a visitor into a paying customer. It’s actually pretty jarring how robotic the robot’s sales pitch is if I am being honest.

If you are serious about making money online, it’s never a good idea to select a product claims it has automated the process of making money. First of all, if this is real, why even sell the product? A program capable of earning money automatically would be a secret so heavily guarded that you would need to hire Sherlock Holmes to even have a chance of spotting it.

The point is, if the offer is too good to be true, it probably is. That is the case with this program. This program seems like a good system on the surface but if you dive deep enough, you will uncover a lot of flaws that simply can’t be overlooked.

Overall, I would rate this product a SCAM.

If you are growing tired of looking for online money making opportunities over the internet, I have some good news for you. Like you, I was once a newbie, searching for all kinds of money making schemes on the internet. I won’t lie, I have tried many products over the years but there are definitely standouts that helped me get where I am now. I will link below my most recommended product that has helped me grow my online empire. No frills, no BS.