Is MyEcon A Scam

Not too long ago, almost all MLM companies operate via brick and mortar stores, wherein they would arrange their meetings in there, sometimes gathering thousands of people for a meeting. A lot has changed since then. The paradigm of the market changed, and along with it, the MLM industry. Today, a lot of MLM companies don’t even have a single meeting room but one office where it functions as their base of operation. This is mostly due to the fact that MLMs today operate only using the internet.

Today, we’re going to look into another MLM company that operates using the combination of the two, a physical store and the internet. The company is named MyEcon (My Economy) and it functions as a seller of personal finance, debt consolidation, other financial services, and surprisingly, nutritional products. Looking at the surface, MyEcon looks just like all other MLM companies on the market but with one key difference. The product line of this company is somewhat varied, ranging from financial packages to nutritional products.

What Exactly Is MyEcon?

MyEcon, as stated above, is an MLM company that focuses primarily on the finance side of things. The forefront of their company seems to be a legitimate service targeted at people who are having financial troubles. In particular, their debt consolidation packages allow for refinancing of your debt, which if done properly, can improve your financial situation and credit score.

If you remove the MLM and recruitment aspect from this company, it would look like just any other loan company. However, as I observed in my research, recruiting seems to be a big part of this company’s culture, like in other MLM companies. Members are encouraged to bring in as many people as they can, sometimes even being pressured to bring friends in to keep the money flowing. While the recruiting part does not necessarily make this company a scam, it does paint a somewhat negative picture.

How Does MyEcon Work?

This is almost the same as asking, ‘can you grow your income with MyEcon?’

The answer to that is yes, absolutely. You can grow your income with MyEcon but only if you really understand what you’re doing. For newbies, this company can be overwhelming because there’s so much to learn, especially with their complex compensation plans, and aggressive marketing tactics. It’s quite a mouthful for beginners if I’m being honest. For this reason, I would advise caution to complete beginners and instead only recommend this company to intermediate or professionals.

MLM isn’t like any other business where you punch in your time card and expect money at the end of the week. This is a different beast, for obvious reasons. For some, it will take years to start making money, and some even longer than that. But once the flow of money gets consistent enough, it can supplement your other income, and in some cases, even remove the need for a full-time job altogether.

How Do You Earn Using MyEcon?

Once you become a member, you basically have 2 choices on how to make your money. (1) You can sell their financial and nutritional products or (2) you can recruit members to earn bonus pay checks. It’s just like any other popular MLMs. You sell or recruit – it’s that simple.

For an MLM to work, the product must be good, or better than what the market is offering. The items must have greater intrinsic value than those of the competition because usually, MLM products are priced higher than market average. For this reason alone, the product should be worth the price jump. Unsurprisingly, this is where most MLM fails. Many MLM companies fail to justify the price of their products leading to failure because no one actually buys them.

The second concern is for the recruitment part. If you’ve been in an MLM business before, you must already know how hard it is to recruit someone to your network. In many cases, you may even end up alienating your friends over the invites because let’s face it, MLM does not have a squeaky-clean image. In fact, the opposite is true. MLM companies are now being bombarded with reports of pyramiding and other shady charges which tarnishes the image of the industry as a whole.

MyEcon has a huge range of financial products to choose from. The oddest ones out of their 9 categories is probably their coffee and health line. The difference is jarring because they have built this image that they are a finance company yet somehow, they also offer food and health supplements.

The company is relatively old, especially when compared to the most recent MLM companies I’ve reviewed like Jeunesse Global. It was started in 2005 by Ivey Stokes and Alvin Curry. However, upon checking their executive members from their about page, it seems like the original founders have sold their rights to the company. At the time of this writing, their corporate executive team consists of the following (see image below): 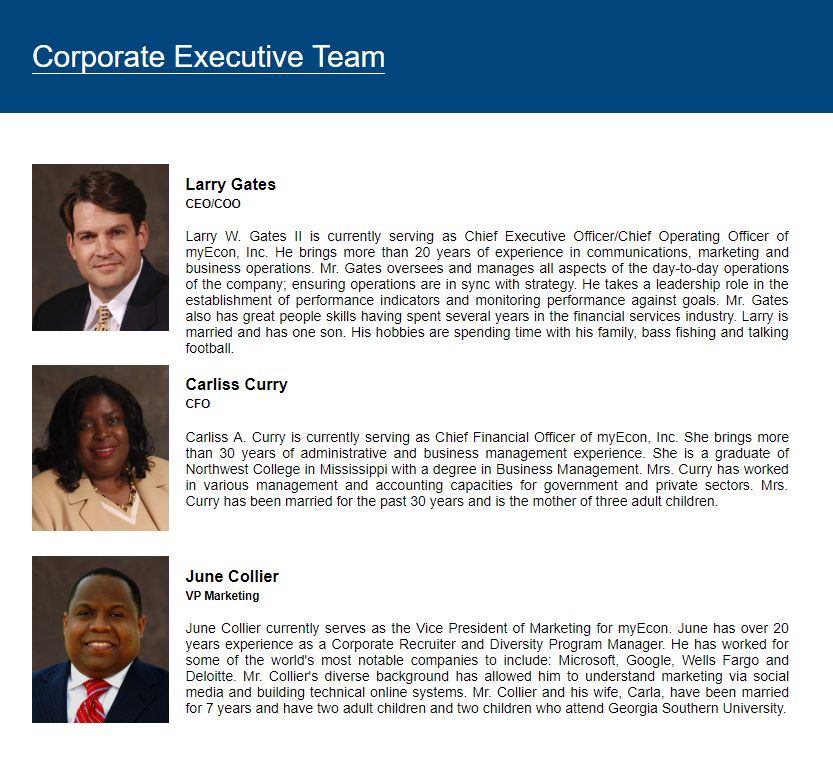 Many pyramid schemes just masquerade themselves as MLMs in order to re-brand their scams. Most of these companies don’t even offer good products but rather only put them there as a placeholder, a product line to show to people to avoid suspicions of it being a scam.

MyEcon, surprisingly, has a strong product line that has helped a lot of people gain their financial footing. Sure, there are some complaints about this company on BBB (Better Business Bureau) but as far as I’m concerned, those are just normal bad reviews from customers. You can’t really have all good reviews.

For what it’s worth, this company has been operating since 2005 and has seen very minimal disturbance to their image. It has a A+ rating on BBB, which is always a good sign. Their joining fees are very low, which starts at ~$20 for an entry level position and then $34.95 per month to keep your membership active. If you compare it to the most popular MLM companies out there, it does seem like it’s on the lower end with regards to pricing.

To answer the title of this article, MyEcon is not a scam.

The fact that they carry out legitimate products proves that it is a real company. However, that doesn’t tell the whole story because there are still aspects of this company that are in question. Having a successful product line does help negate the bad press associated with MLMs but it does not necessarily dispel the fact that it is one. But for now, based on my research, this company seems legit.

But then again, earning a good stream of money on MLM companies is going to be hard because of the actual mechanism behind the payment structure of MLMs. If you want to earn money, you need to push your products towards the market and you can only sell so much before the market gets saturated with it. If you want another method of earning money, you need to recruit members to be your “downline” which is going to be extra hard because of the negative connotation associated with MLM companies. What’s even worse is for you to reach your earning potential, you need to recruit people regularly. If you only do sales, you are seriously hindering your ability to earn because a respectable chunk of your earnings will actually come from recruiting people to your network. Understandably, you need to focus more of your energy towards recruitment which makes the company appear to be a pyramid scheme.

If you are getting tired of MLM companies, you can opt for another type of program instead. There are many money making online programs to choose from and you only need one to get going. If you’ve been reading my reviews for a while now, you may already have an idea of the product I would recommend. But for newer readers out there, let me introduce you to this product anyway. Click the link below if you want to make money online.