If you are in the States, you are probably well aware of the fact that Marijuana belongs on the Schedule 1 of DEA’s drug classification, which is the class reserved for controlled substances that have a high potential of abuse. But lately, a lot of movements have been happening surrounding marijuana to remove it from the list altogether, and if possible, make it legal. Several states have already joined the cause and a lot more are planning to.

It’s actually fair to say that Marijuana or Cannabis will become legal in most states in the near future, with strong public support and plenty of research being made to show its efficacy in treating certain diseases. It’s still an ongoing battle but we’re slowly inching our way to legalization, which is progress nonetheless.

What Exactly is Kannaway?

As I’ve said above, Kannaway is an MLM company that is offering products that contain active ingredients in Marijuana. This is a very refreshing view on what’s to come when Marijuana gets legalize because we’re going to see a lot more companies try to get their hands on this new untapped industry. Kannaway is several years ahead of that movement since it is marketing Marijuana today even though the majority of the States still has it classified as a Schedule 1 drug. In some sort of way, Kannaway could be considered a pioneer in the adaptation of Marijuana into a large-scale business setting.

Marijuana is actually too broad a term when you try to get scientific with it. There are several active compounds that are present in the usual strand of weed most of us are familiar of. Kannaway makes use of the cannabidiol (CBD) active ingredient of Marijuana. The CBD ingredient, in case you didn’t know, is the less known active ingredient of Marijuana. It does not actually produce a high feeling, that we’ve associated with Marijuana. The compound responsible for the “high” is called THC or Tetrahydrocannabinol. Now, that’s out of the way – Kannaway products do not make you high, in case you’re wondering.

Kannaway was founded in 2014 and started out as a typical MLM company that sells beauty and health-related products, as most MLMs do. In 2015, it was bought by a company named Medical Marijuana, Inc. which is the same year it began offering products laced with CBD for health purposes. This isn’t a coincidence, obviously.

How Does the Kannaway System Work?

Kannaway, despite its image of being a hip and cool company functions just like any other MLM company you’re familiar with. The only difference is the product they are selling. If you actually remove the sales hook that is the Marijuana, it begins to look just like any other MLM you see on the market. It has the same compensation structure. The same sales pitch. The same packages, the whole nine yards. The only real unique thing about this is the Marijuana part, which we will discuss in a bit. 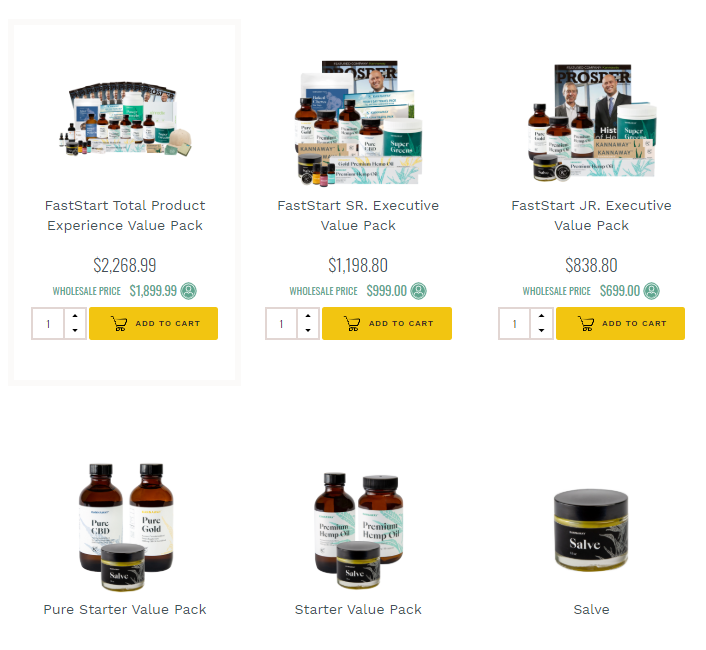 The company produces several items that range from Pure CBD Premium Capsules to CBD Salve. They claim all kinds of health benefits from their items, mainly because of the active ingredient CBD. Now, I am inclined to tell you that while CBD is shown to have plenty of beneficial effects on the human body, more studies still needed to be done to make certain of its efficacy as drug treatment of choice. When you think about it, Kannaway seems to only be riding on the hype train that is CBD in order to make the items look a lot of effective than they truly are, but I digress.

Despite Marijuana not being legal in all of the United States, Kannaway products are legal, since the active ingredient they are using does not induce the sensation of being “high.” If you live outside the USA, you better check on your drug policies before you order this product as it could land you in a lot of trouble.

How Do You Make Money Using Kannaway?

The first way to earn money on Kannaway is by becoming a Brand Ambassador. Again, this is a very typical MLM structure. The cost of becoming a member is around $55 which is a yearly fee that you can to pay for every year that you are an active member.

As with all MLM companies, there are 2 major ways of earning money, either by selling products or recruiting members to your network. Selling products is pretty self-explanatory. You buy a product at a discounted price and sell it for a profit. It’s pretty simple and what the majority of MLM companies are build upon.

Now, the second part of earning money is somewhat tricky. You will earn a commission every time you recruit someone to join the group. Their compensation plan is a bit more complex than other MLM companies but the idea remains the same – you recruit people, you earn money.

When you read about what people are saying about Kannaway products, it seems like their items are well-received by the users. Of course, there will be some people claiming otherwise but that is to be expected. However, feedback for the company itself, Kannaway, isn’t so hot. The company is an MLM somehow makes it look a little less trustworthy than if it’s run like a regular company. In any case, people are still not sure of how to treat MLM companies.

Another common issue that is thrown into the company is its claim to having the purest CBD tablet available on the market. It’s actually really hard to verify these claims, much like the “the toothpaste 95% of dentists recommend.” Anyone can say that and no one would be crazy enough to put it to the test. Because of this, Kannaway actually sent samples to an accredited testing facility and it was found that they are indeed producing pure CBD tablets, which is a win.

They are indeed selling pure CBD tablets but are they priced fairly? It’s tricky to say because their tablets are at least 2-5 times more expensive than generic CBD products. Now, the question now is if maybe it’s a warranted increase because of its purity. That’s actually out of the question because its competitors have also been tested by the same accredited facility so take from that what you can. The fact remains that Kannaway is still an MLM company that prioritize profits above all else.

Should You Join Kannaway?

Most marketers would say that if you join one MLM company, you have joined them all. This is partly true because majority of MLM companies have the same template and structure. This makes reviewing MLM a bit tricky since it’s highly likely that you have reviewed the same structure before, and now it only has a different product but all the same structure. 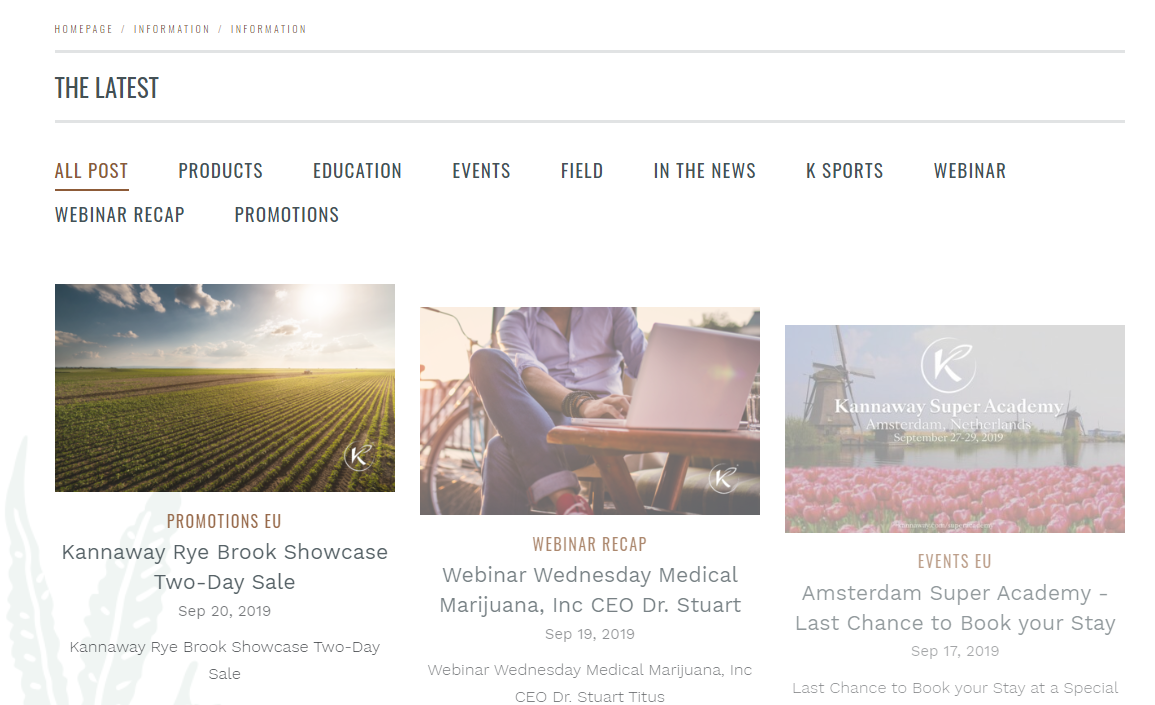 I can say the same about this company, Kannaway. The only real innovative thing it did for the MLM community is provide a product that is still considered controversial. Other than that, it’s just a plain old MLM company that’s been done thousands of times before.

But to be fair, there is a growing sentiment that in the early 2020s, Marijuana-related companies will see an uptick in their market because legalization seems to be on the horizon. If even a part of this is true, then investing into a company that is closely related to the Marijuana industry would be seen as a smart investment. But then again, Kannaway remains an MLM company.

Would I join this company? I would answer with a yes, but with a whimper. The time to join this company was maybe, 2 years ago, when it was still in its early stages. Today, I’ve already seen 3 other MLM companies that are offering CBD tablets. It seems like the competition has joined the fray and what was once a single-player campaign become a PVP battleground of sorts.

If you are interested in investing in something a little less controversial than Marijuana-related companies, please check out my reviews of other companies. In there, you will see several hundred of reviews of money-making companies. But if you want to skip all that and focus on my most recommended program out of all of them, click down below.