Is Digital Payday A Scam? 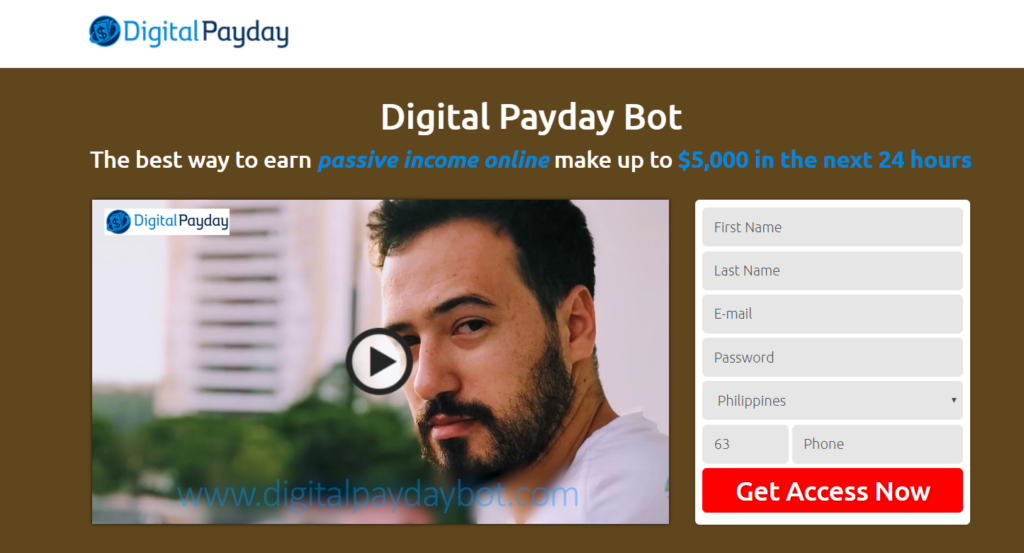 Price: Free to join but needs a minimum $250 investment, plus add-on fees

Verdict: There’s no such thing as free money which is exactly what this program is claiming. I’d be wary if I were you.

Because of the sudden rise of Bitcoin in 2016, plenty of companies wanted to follow suit. Nobody saw it coming and if someone tells you that they did, they are clearly lying. It’s one of those things that spring up suddenly, no warning.

This event put the cryptocurrency market on the map, where it stayed relevant for the next years until today. Plenty of cryptocurrencies came and went, with most of them promising returns similar to that of Bitcoin’s. Not one even came close. Plenty even has been declared outright scam.

Now, almost half a decade later, the industry has calmed down, but the creation of new cryptocurrencies has not stopped. In fact, a report was published that showed that cryptocurrency scams this year is at an all-time high.

That being said, you must always be on the lookout for these scams because they could be anywhere. Most companies lurk in social media, posting advertisements like “earn $5,000 in a week…” or something of the sort.

One company that’s been on my radar for the past couple of weeks is called Digital Payday. It’s not exactly a new cryptocurrency but an automated software that allows you to buy crypto based on a market trend. Think of it like stock trading but instead of company stocks, you’re buying crypto.

This all looks good on paper but does it really work? In today’s article, I am going to take a deep dive into this program to see if it’s worth your money.

What Exactly Is Digital Payday?

Digital Payday is an online trading and investment program specifically made for trading cryptocurrencies. They claim to help their users earn up to $5,000 per day. This claim is pretty egregious because let’s be honest here, no one can earn that much using an automated trading bot.

Oh yes, did I mention that this program is all automated? They claim to have found an algorithm that can predict the market trend using previous models of the Bitcoin boom in 2016. I don’t know about you but if an automated program claims something too grand, I will need a big proof before I believe.

And I’ve never actually known an automated bot that could make money. So right off the bat, there is a big question to the legitimacy of the claims of Digital Payday.

Who Is The Creator Of Digital Payday?

The creator of Digital Payday is a man named Daniel Bluth, who is also heard in the website introducing the program. 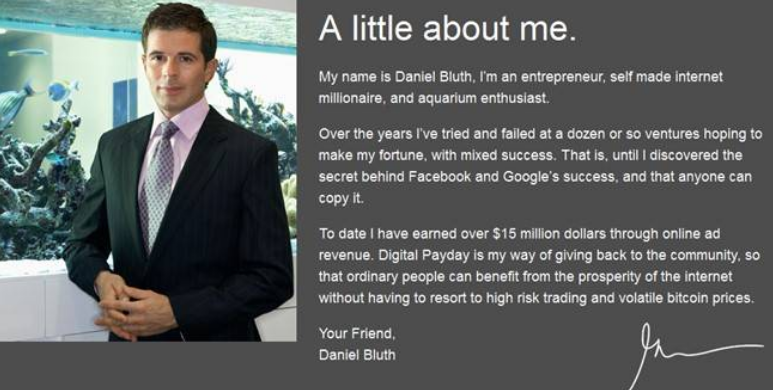 In short, the only information you will hear about Daniel Bluth is the one he tells you about, which is a bit biased, don’t you think?

I am also pretty sure that Daniel Bluth isn’t his real name. Most companies don’t give out the real name of their creator to protect them from the backlash should it crash or fail. And there’s a huge chance that this program might do just that.

How To Become A Member?

Becoming a member is easy. All you have to do is create an account by visiting the site. It does not look that different from any website that needs registration.

The only real difference here is you need to watch several ads before you can finish your registration. I’m assuming that is to earn the site a bit of ad revenue since they claim to be completely free.

Daniel Bluth claims that you would start earning as soon as you finish your registration.

He even claims that many people have left their job because of how much they’re earning through this FREE program. In case you still can’t tell – this can be considered a bald-faced lie.

There isn’t a single FREE product that can give out $5,000 per day, pure and simple!

Do I Need To Pay To Become A Member?

This program is actually free to join but there’s a catch.

Yes, you can join for free but you won’t be able to do anything with your membership. If you want to actually trade, you need to deposit a minimum account of $250. That’s quite a large sum for an investment program. Most program starts out at $5.

In short, it’s not exactly a free program. They just call it that because registration is free.

All things considered, the actual price is $250 for the very basic membership.

There really isn’t much to like about this company at all. The very first thing that will welcome you is an outrageous claim without any proof whatsoever. A claim of $5,000 per day earning should also come with huge proof because anyone can just say any amount.

The author of this program made several statements that made no sense. It’s as if he wants everyone to sign up for the program and leave their job. He repeatedly says that many people have done so, and that’s proof enough.

It’s not proof. It’s actually quite the opposite.

Daniel Bluth is a real person but that is not his real name. Daniel Bluth is just a person created to put a face to the program. They know that putting a face into a program would make people less wary.

Upon further research though, you will learn that he is not who he says he is, and no information can be found on the internet about him. All that’s known about him came from him, which is quite problematic, yes?

If you search on the internet about this program, you will get several results from new websites praising it. I’m not saying that such a thing is impossible. It’s just less likely.

If you take your time to read the reviews, you will notice plenty of similarities that are hard to ignore. It’s as if the reviews are written by the same person or robot. It just feels very unnatural.

Similar to many scam products

I’ve already reviewed numerous crypto trading programs, and I don’t remember giving even one a good grade. There are just too many scams out there, especially in the cryptocurrency industry.

It’s safe to assume that most of the crypto-related trading platform you see on the internet are scams unless proven otherwise. That’s how wild this industry is.

Another thing that I don’t like about this program is there are no refunds. Once you have deposited any amount to your account, you won’t be able to withdraw it back again after a while.

Automation in stocks is never going to work

Automation in such a volatile market is hardly ever going to work. For stocks and bonds, you can opt for an almost-automated approach but those are still managed by a fund manager.

To put your trust into the hands of a trading algorithm seems a little bit too ignorant if I must say.

Conclusion – Is Digital Payday A Scam?

The answer is YES!

This product is a scam. There are plenty of tells which I’ve already listed above, and those are only the biggest ones. I can probably add more if I listed all the things that are negative about this program.

The cryptocurrency industry is filled with these little scams. The reason for this is it’s just a new market which experienced a boom in 2016. Many people are still hoping for a similar break. The truth is, no one actually knows when it’s going to happen.

This is the reason why so many scams are popping out of nowhere. Scam artists take advantage of the “easy money” fascination of people. It’s just that this industry is where the concentration of gullible people is at so it makes sense for scammers to target this demographic.

If you really want to earn….. I have got something for you.

I know that learning that your prospect program is a scam is hard, and as such, I’ve prepared something for you. I don’t want you to be empty-handed.

I will now share with you the program I’ve been using to earn money online. I’ve been using it for years now and my readers can vouch for its efficacy. Just click the link if you want to learn more.