A side hustle is never a bad thing. In fact, an increasing number of households will need a side hustle at some point because of how our economy is doing right now. This may have been a direct result of wealth inequality but that’s for another story. Most households today can’t live on a single wage and for that reason, the money making industry on the internet is booming. It’s booming in a sense that you will be plagued with many advertisements about online money making wherever you will go.

Unfortunately, you need to wade through several thousands of programs before you can find the right one. The vast number of money making programs on the market makes it a very challenging endeavor since there are so many to choose from. If you choose poorly, you will just end up wasting your money. If you choose the right program though, you will have the potential to supplement your income, and quite possibly even remove your need for a full-time job.

Today, we are going to look into a new money making scheme that has been making its rounds on the internet. The product is using viral marketing as their main source of advertising because it makes the highest conversation rate. There is a big reason why becoming “viral” is the point of many products. Once you go viral, your product will become a success almost overnight. No other types of marketing have this kind of power.

Now, comes BitTrain. It is a relatively new product that claims to help people earn up to $100,000 in cash. First of all, it’s quite a claim! That is a hefty sum and if I were being honest, on the surface, it seems like it’s almost impossible for a program to earn this much. But I digress. Maybe there is something special about this company which enables it to earn this much. We’re going to review this product to see if it really does have the capability to help you earn this much money over a short period of time. Without further ado, here’s the complete review.

If you visit the website of BitTrain, it will seem like it is a start-up company that is looking for investors. Strictly speaking, BitTrain shows itself as an investment opportunity that is poised to have an ICO (initial coin offering) in the near future. It’s hoping to follow in the steps of the cryptocurrency that started it all – the Bitcoin.

It’s an enticing premise because as we all know, if you want a bigger earning potential, you need to be there when the company is just starting out. What better way to invest on a company than when they’re literally just building it? So far, it’s looking like a good idea. This is a startup company looking for investors – check. It has the word crypto on it – check. It pretty much checks all the boxes of a good investment opportunity, but does it, really?

BitTrain claims to have created a new kind of crypto currency dubbed as “BTRC” that is to be traded once it goes public. It claims to have created an even better version of Bitcoin, with better security and faster transaction rates. The information on the website is a lot to digest but it’s actually very simple. It’s a new crypto currency that is looking for its first adopters to finally have the product take off. The company said that it expects the value of their own currency to grow tenfold in a span of 1 year. This is yet another optimistic claim but is not entirely unheard of. Bitcoin has experienced an even bigger uptick in value than what they claim. So, their claims are somewhat plausible. 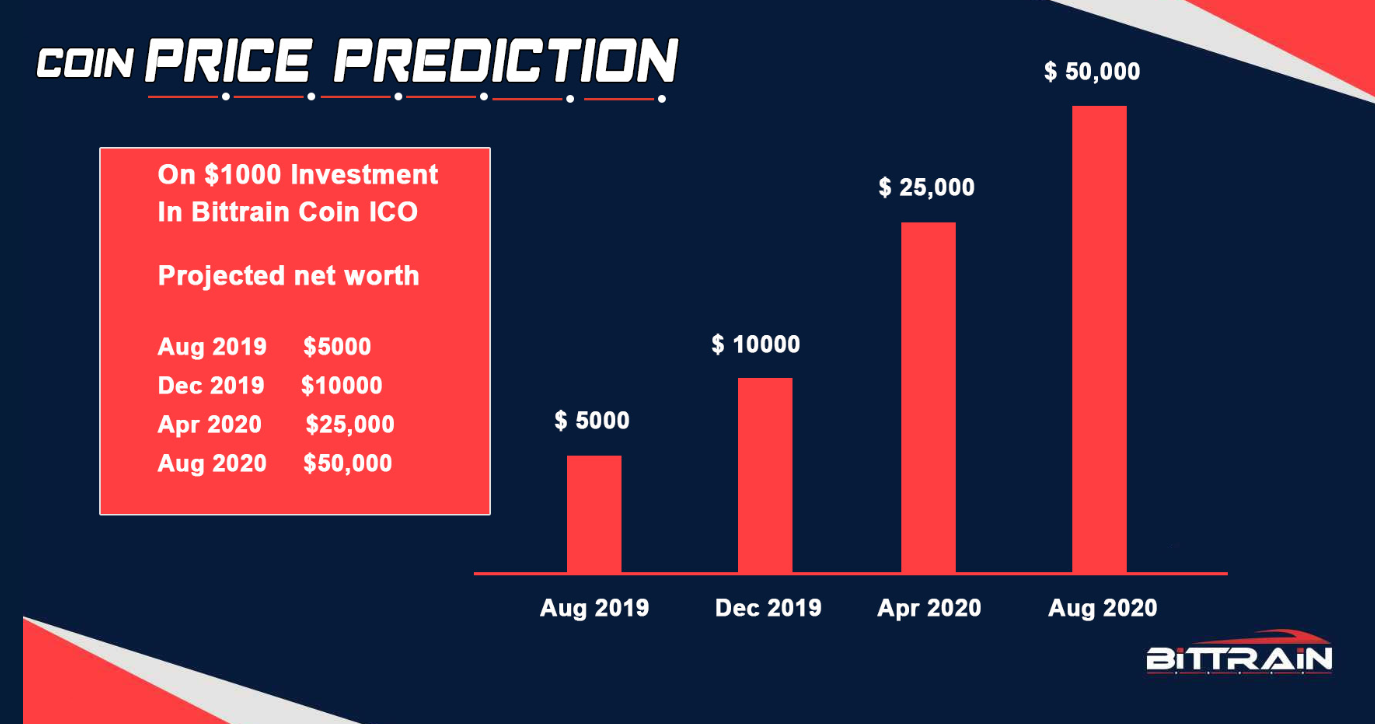 So far, everything seems to be going well for the company. But again, let’s look further.

As I’ve stated above, it works just like Bitcoin where you mine your money using complex algorithms and equations that your computers have to toll over. It’s basically turning your electric bill into a virtual currency. When I put it that way, it makes it a bit less enticing but I am technically correct in saying that.

BitTrain, right now, has no inherent value so to speak. In order for it to have value, people must start using it first. But therein lies the problem. There are literally thousands of crypto currencies right now, still riding on the high that Bitcoin gave several years ago – and there are no signs of it slowing down. The value of Bitcoin has dropped drastically over the last few years but still, cryptocurrencies are still popping up consistently hoping to catch even a fraction of the success of its predecessor.

Having said that, there’s actually many reasons to believe that BitTrain is not even a real ICO opportunity. There are holes in the company that we’re going to talk about in the section down below.

The Red Flags Of BitTrain

There is a strong case for BitTrain being a Ponzi Scheme. If you research deep enough beyond the surface, you will see that there are many red flags on how it supposed to operate versus what is the norm on cryptocurrencies.

Ponzi scheme works by paying the “top” investors with the money gained from the “bottom” investors without either of the party knowing. If the “bottom” investors recruit people, they will now be a level higher, thus, continuing the cycle of paying people at the top from the money gained from lower level investors. The problem arises when the pyramid collapses because it’s impossible to secure an indefinite amount of fund because there is a finite supply of people to recruit.

Here’s a video below to help illustrate how pyramid scam works.

BitTrain actually has a lot of payment plans, depending on how much you are willing to invest. I’ve put down below their compensation plan. As you can see, it does cover a lot of ground, in terms of who can invest. Their plan starts from $100 to $250,000. This is a huge range of amount. 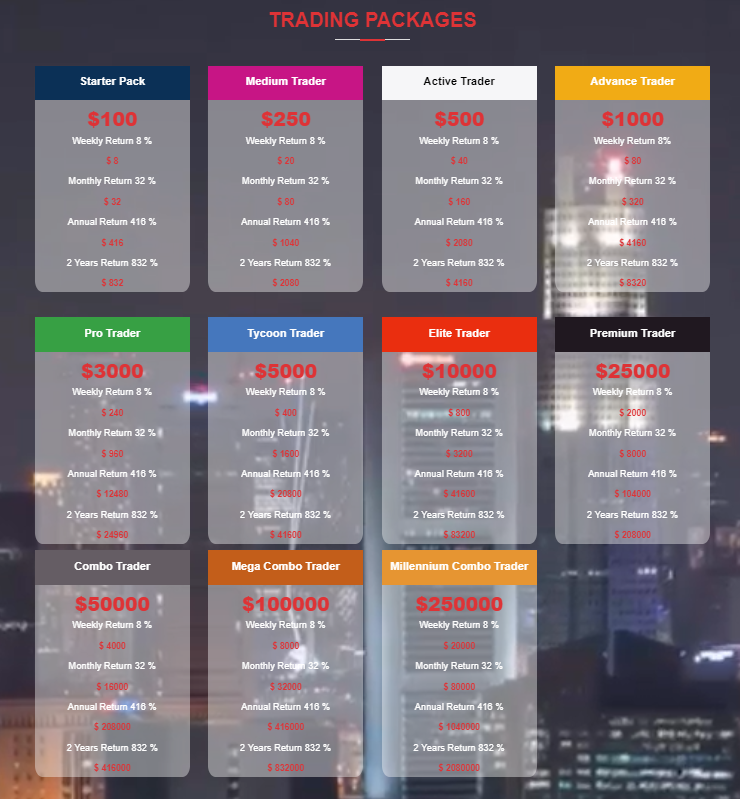 On the surface, BitTrain seems like a legit company because it does pay its members in a timely manner. However, that is yet another characteristic of a classic Ponzi scheme. Ponzi scheme companies will pay out money to their investors until they run out of it, or until they decide to take the whole pyramid down. Usually, the owners would decide when to pull out their funds because they have insider information when the pyramid will collapse.

So, in my opinion, BitTrain is a thinly veiled Ponzi Scheme.

The first few levels of investors would get their money back, so to speak. This would then lead them investing more of their money, ultimately funding the next round of payment. While the news of this new investment gets around, more people would eventually want in on the scheme. They would get their first few payments but as the scheme goes on, and it eventually loses its steam, and fewer and fewer people join, the collapse will then commence. This is where the owners of the program would leave or sometimes just completely disappear, leaving behind a horde of people unpaid, clueless on what really happened to their investment.

On the States, there have been literally thousands of open cases with regards to pyramid schemes, with class action lawsuits being brought up consistently, claiming that investors have been duped under false pretenses by the companies in question. Now, this begs the question, why do people keep falling for these schemes? Well, the answer is simple. The temptation of money is very hard to pass up. It’s just human nature and we’re all suckers for it. One good thing now is at least we have a lot of information about these Ponzi Schemes that we could use to protect ourselves.

If you want to check out my other reviews, you should click here. And if you are looking for a good affiliate program or just any program that would help you earn money online, you should definitely check out my #1 recommendation.