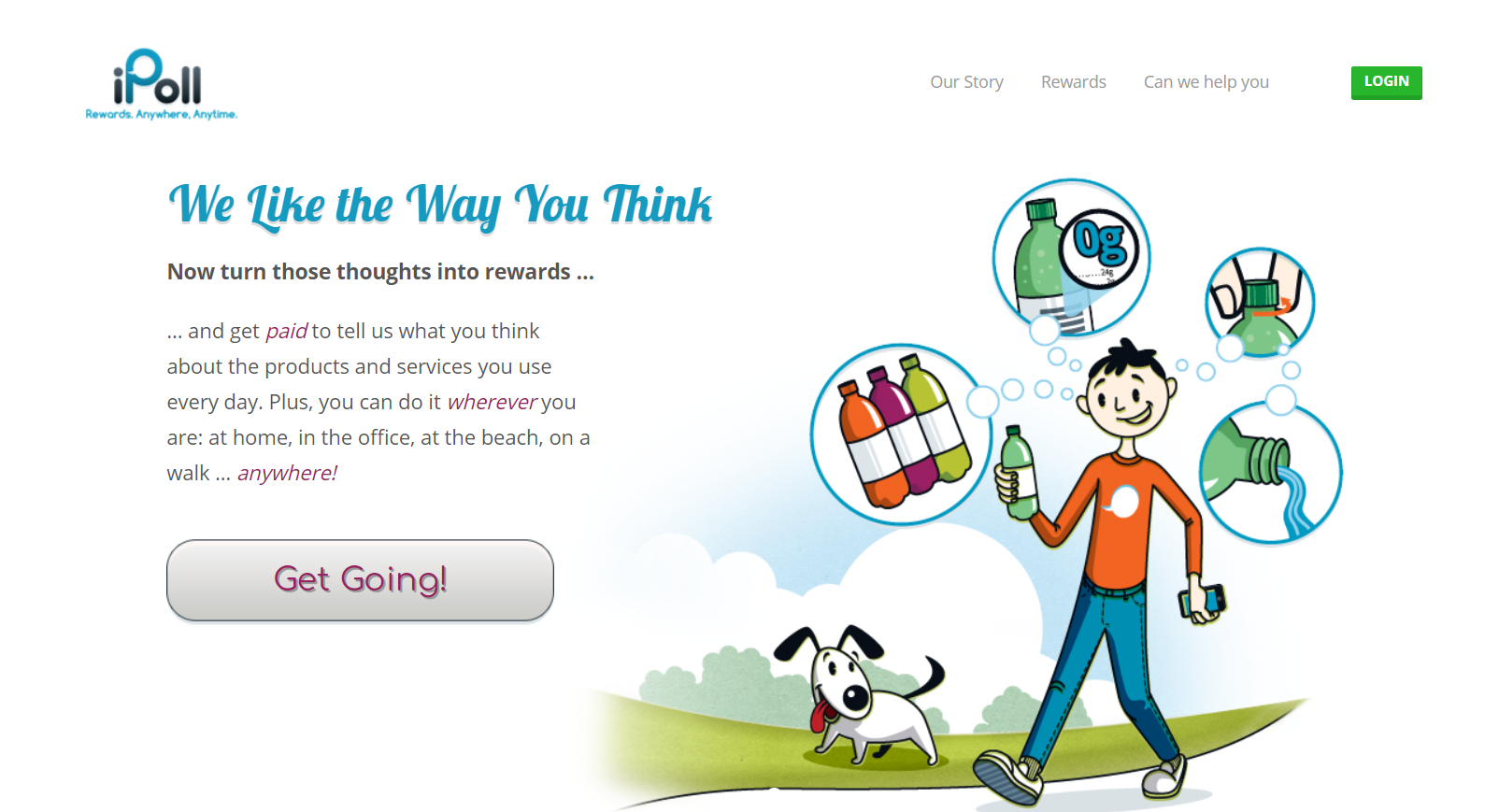 Unless you’ve been living under a rock, chances are, you probably have an idea of how widespread survey websites are on the internet. If you search on the internet to look for money-making opportunities, you would notice that a good chunk of the search results would be about earning through answering surveys. I’m going to tell you now that it is possible. You can earn through answering surveys but there’s more to it than that. Today, we’re going to review a survey company, iPoll, to look into this unique world of survey companies. Can you really earn a good living from it?

In this review, we’re going to look into iPoll to see if their claims have any merits to them. Their tagline is “Rewards.Anywhere.Anytime.” which simply means that you can earn anywhere you are, and anytime. I’m guessing this is a feature since they are mobile-based. That is one of their main features because most survey companies still require desktop for their users. I am going to look into all of that to help you get an understanding of this platform and what can you earn from it.

iPoll is another online survey provider based in the US. Basically, it pays its users several bucks when they finish answering the little survey. It functions very similarly to all survey websites – you answer, you get paid. That’s the underlying idea behind all survey platforms.

iPoll has been around for quite some time now but the name “iPoll” if fairly new since it was introduced as Survey Head when it was first created. They renamed it to iPoll to perhaps ride the hype of iPhone products. They also go by the name of uSamp which follows the same pattern but isn’t nearly as cool a name as iPoll.

The one unique thing about this website is its focus on mobile. The creators of this program thought that since 99% of their users own a smartphone, they should probably shift their focus to that. As a result, they centered their website around mobile which allows all its users to complete surveys on-the-go. If you think about it, it’s genius because it opens up the program to more people.

How Can You Make Money Using iPoll?

You just need to complete a survey and they will pay you. Yes, it’s that easy. The only trouble you will face is it might take you a while to get a survey that you are qualified for. In short, answering the survey is the easy part. It’s the searching part that’s hard.

But that’s not the only issue. Another issue that is very common in these survey provider companies is the abysmal pay rate. Even if you somehow managed to snag several surveys and answer them as soon as you can, your pay rate would still be lower than minimum wage – and that is saying something.

To be fair, you should not expect to earn a salary when you use these programs. If I’m being honest, all they’re good for is providing pocket money – extra money. They also provide rewards to their users. For instance, they can opt for Amazon gift cards instead of cash which they’d probably just use on Amazon anyway.

The first thing you need to do when searching for issues with a company is to use the internet. Do a simple search and you will be flooded with articles or even websites talking about the problems of that particular company. That’s the first part of your research.

You have to remember though that everything you read is NOT necessarily 100% accurate. Most reviews you will find online are biased and will have their own agenda. The best course of action when doing research is to read both good and bad reviews. Compare those two and you would have a better idea of the whole picture. Of course, you also would need to focus on the average reviews as they usually offer the most unbiased look of the program.

With all that being said, in my limited usage of this platform, I have found out many glaring issues. These are the type of issues that you won’t be able to just ignore. I will list the biggest issues below.

With every introduction of new survey companies, it saturates the market which means that more companies are sharing the already limited amount of surveys available. What this does is the demand overtakes the supply. In the end, most websites in the survey industry do not have much available tasks for their users.

There is no guarantee that the survey you just answered would get approved. This is one of the craziest complaints I’ve read about this company. What this means is there is a good chance that you won’t get paid for the survey you spent your time on.

In some instances, the approval of the survey would come 2 months after you finish it, which is laughable if you think about it. Can you imagine spending 1 hour answering a survey then getting denied, but not right after, but after 2 months!! That’s crazy.

If you have the patience of a monk and managed to actually get to the threshold of $50 and finally made a withdrawal, you would have to wait 4 additional weeks for the money to get cleared on Paypal. That’s for 1 month. There are also cases wherein the wait could extend up to 8 weeks – that’s 2 whole months!

If you couple that with the first issue I listed above, it’s in the realm of possibility that you would need to wait 4 months to harvest the fruits of your labor. That’s beyond ridiculous. I could offer you a dozen alternatives right here, right now.

The reason I call their payment threshold “ridiculously high” is because the pay per survey is very low. Let’s say you’d get paid $0.25 per completed survey. That means that you would have to finish 100 surveys just to hit that $50, and that’s if we consider that the surveys you answered would get approved 100%. As I’ve said, their survey approval policy is all over the place. I could better explain quantum physics than their policy.

Before I write my thoughts about this platform, I should first tell you that iPoll is not a scam. It is a legitimate program that provides a small earning potential to its members.

That being said, while iPoll is not a scam, it does have some weird rules and regulations that you should be aware of. I’ve already written their biggest issues in the section above. Basically, their main problem is the delay. There’s a huge possibility that you won’t get your earnings even months after the fact. Due to this issue, a lot of users would ultimately quit the program, leaving behind several dollars in their account. I have a feeling that that is an intended effect of this program, which is quite sinister.

Overall, I won’t recommend this program to anyone. There are plenty of alternatives that you can choose instead. You can check my other reviews here. Now, if you are NOT looking for another online survey provider, I can point you to the direction of affiliate marketing. It’s the most profitable online money-making industry, at least to my knowledge. I’ve been using affiliate marketing for years now and I’ve only known success since then, and you can do that, too. If you are interested in learning more – and how I make my money online, click right down below.